Roulette is one of the world’s most popular casino games and has been delighting casino players and gamblers since it was created. It’s origins were in France in the 1760s, and the word ‘roulette’ comes from the French for ‘small wheel’.

Legend has it that it was mathematician Blaise Pascal who came up with the game while he was working on building a perpetual motion machine, accidentally starting one of the world’s most popular games, although other accounts suggest that the game was created by casino owner Francois Blanc. There are even suggestions that a similar game had been played in China and introduced to France by Dominican monks. 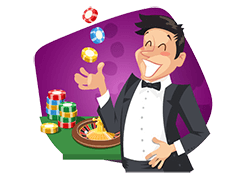 However it was developed, roulette has become one of the most popular table games in the world, and that casino popularity has inevitably moved online. Today millions of South Africans play online roulette at their favourite casino sites, many of them enjoying the latest in Live Dealer technology that evocatively recreates the atmosphere of a real casino.

Modern roulette remains similar to the original version, but over the years, it has been developed and improved and there are now three main versions of the familiar game, each with slightly different rules. If you’re new to online roulette play or you just want to understand more about the game, here is a quick guide to the main varieties.

The game known as European Roulette is the standard version of the game that you will find at most online casinos, and is popular with many South African players, for the simple reason that it offers less of a house edge. On a European Roulette wheel, the numbers go from 0 to 36, and there is no 00 slot. This means that when you play European Roulette, your odds of winning are 37-1 and the house edge is just 2.7 percent.

Roulette became popular in the United States in the nineteenth century, and casinos soon developed their own version. American Roulette is the main variation to European Roulette, and differs from the older game in two ways.

There is a third variety of roulette that you may encounter online. French Roulette differs from the other two versions, but has some characteristics in common with them.

The most obvious differences are superficial. All of the numbers on the French Roulette table are white, instead of black, as with American Roulette. The betting table is also arranged differently. With American Roulette, the outside bets are on the left of the table, but in French Roulette, this betting field is divided in half and situated at both sides of the betting table. Many of the bet names are also displayed in French, rather than English. The most important variation is in the house edge. Like European Roulette, French Roulette is played on a wheel with a single 0 slot. But thanks to additional game rules, the house edge is much lower, at 1.35 percent. Understandably, this makes French Roulette particularly popular with South African casino players, though it is less common.

Roulette has captured the imagination of casino and gaming fans for centuries, and thanks to the wonders of digital technology, South African casino fans can enjoy this thrilling game in all of its variations at their convenience. Whether you are playing American Roulette or Live Dealer French Roulette, there are few more stirring sounds than the whir of the wheel and the clatter of the Roulette ball.