Desert Treasure is the original game that preceded the well-known title Desert Treasure II. It was released by Playtech in 2006 so it may look a little dated, but it has simple, clear graphics and easy-to-follow play. It also offers access to the life-changing amounts available with the progressive jackpot network, ensuring that it remains popular with online casino gamers in South Africa and around the world. 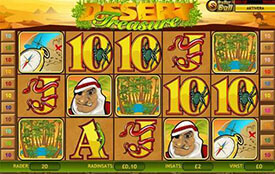 Desert Treasure can be played for as little as R0.14 or as much as R14,257, making it suitable for a wide range of players. It’s a fairly standard online slot that offers five reels with twenty pay-lines and has a North African desert theme. The background to the play features sand, pyramids, oases and a sprawling desert receding into the distance.

The symbols support the desert theme. Along with the traditional playing card values of Ten, Jack, Queen, King and Ace, there are other icons depicting a cobras, princesses, maps, oases, camels, spiders, beetles, scorpions and lizards. There are also special symbols represented by a golden cobra, which operates as a Wild, a dark-haired Princess, which functions as a Scatter and a compass and map icon.

Although the graphics look dated by modern high-definition standards, they illustrate the game’s theme well. It’s also worth noting that the graphics on the mobile version of the game have been updated. So if you’re playing Desert Treasure on iOS or Android it will look a little better.

The base game offers some solid pay-outs, but Desert Treasure is most notable for some high quality features, such as the Treasure Chest Bonus. This feature is triggered when you line up four or five of the map and compass icons in a single active pay-line. A new screen is opened where a Bedouin tribesman invites you to pick from a number of chests. Each chest contains a cash amount and the number of chests you can choose depends on how many bonus symbols you lined up in the main game.

Free spins are a useful bonus in most online slots games and Desert Treasure has a reasonably free spin feature. It is accessed if you bring up three or more princess Scatter icons on the reels. When you’re in free spin mode, any win that you have will be tripled and it’s also possible to pick up more free spins by lining up another three Scatters. 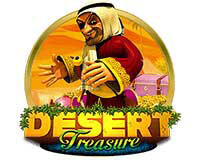 Although Desert Treasure is a comparatively old game, it has been given a new twist by linking it to one of the Playtech progressive jackpots through a lottery-style game. To access the game, you have to click the Enable icon near the Dollar Ball logo on the game screen. Players have to choose five numbers between 1 and 49, or have the game pick them for you. If you match one, two, or three numbers, you will win a fixed amount. Matching four numbers will earn you 1% of the progressive jackpot total. And if you find all five numbers you will scoop the whole jackpot and win a life-changing amount.

Desert Treasure may look a little out of date, but it has plenty to offer the South African slots player. It features a competitive number of bonuses and the link with Playtech’s multi-million progressive jackpot means that this game could deliver you a real life hoard of treasure.