Jack and the Beanstalk slot

Fairy tales are a favourite source of inspiration for slots game designers and NetEnt have reached back into our childhoods to come up with this title. Jack and the Beanstalk is based around the well-known tale of Jack, his magic beans and a giant’s castle in the sky. It has a familiar basic game play but offers a number of bonus features. 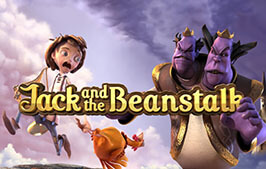 As we’ve come to expect with a NetEnt game, this title is graphically impressive. The tale of the poor boy who climbs a giant beanstalk and becomes rich is beautifully realised, and begins with an entertaining movie clip in which the giant’s castle is revealed, accompanied by some inspirational music. The symbols used in the game fit well with the theme and include a watering can, a thin cow, an axe, a giant and his wife and Jack himself, and the pleasantly illustrated background is a delightful rustic scene.

This is a five-reel, twenty pay-line game, which has a number of interesting bonus features that make it stand out from similar titles. The game can be played for as little as R3.76 or as much as R1878 per spin and although the potential payout isn’t massive, it is a respectable x1500 your original pay-out and is available in both the basic game and the free spins feature. 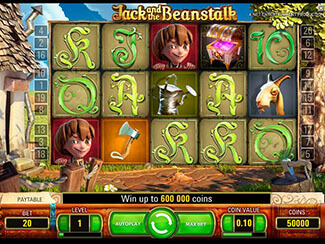 This game employs the innovative Walking Wild feature. Whenever a Walking Wild symbol pops up on one of the reels during the basic game or the free spins game, you earn one re-spin. The Wild symbol then shifts by one reel to the left, offering you more chances to win. The re-spins continue for as long as the Wild is on the reels, and you can also land more Walking Wilds during the re-spin. An extra bonus is the fact that the Wild symbol comes with a 3x multiplier, so you can rack up some good wins with this feature.

The third bonus feature is tied to the treasure-hunting theme of the Jack and the Beanstalk story. The Treasure Collection feature is triggered during the Free Spins feature. Key symbols will pop up on the fifth reel. If you bring up three keys, the next Wild that appears will turn into a stacked Wild of two bags of coins. If you manage to get another three keys, any subsequent Wilds will transform into stacked Wilds featuring three golden hens, and if you manage to bring up another three keys, making in nine in total, Wilds turn into expanding golden harp Wilds, giving players the potential for some big wins.

Overall, Jack and the Beanstalk is a pleasantly-presented game, offering entertaining play and the chance of frequent wins. There is a variety of bonus features and plenty to keep both new and experienced slots players coming back for more.