Launched by the well-known games developer Microgaming in 2009, Mega Moolah Slot was one of the world’s first progressive jackpot games. With a guaranteed R18.8 million jackpot, it has been responsible for some huge, headline-grabbing wins over the last few years. Its reputation for being a lucrative game, and its appealing graphics have made it a popular choice for players in South Africa and around the world. 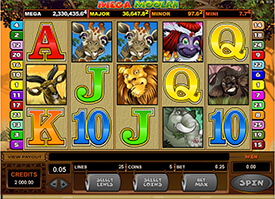 Mega Moolah Slot is designed around an African safari theme. It most closely resembles the cartoon depictions of Africa in Disney's 'The Lion King'. The representations of zebras, giraffes and antelopes are nicely realized and there’s a sunny, uplifting feel to the play. It features five reels, with three rows and twenty-five pay-lines. It is particularly well suited to newcomers and small-stakes gamblers as the minimum wager is a modest R0.19 and the maximum is only R117.

There’s no doubt that the main attraction of this game is the chance to land a life-changing jackpot. That said, the basic game does include two other bonuses: a handy Wild feature and a Free Spins game. The Wild symbol is represented by a friendly Lion. This substitutes for all other symbols apart from the scatter monkey, and helps to bring up more winning lines.

The Free Spins Bonus game is triggered when you line up three or more of the fortune-telling monkey symbols. Players get a total of fifteen free spins, and any wins achieved during the Free Spins game are trebled, which is a handy way to top up your balance.

Progressive jackpots, in which the jackpot increases every time anyone plays it, have transformed casino gaming. Mega Moolah is one of the most popular progressive jackpot games for South African players. It has led to some huge wins all over the world. The biggest to date was a jackpot of R248.6 million, won by a British player in October 2015, and in April of the same year, a Canadian landed a prize of R141.2 million.

Mega Moolah offers four jackpot prizes. There is the main jackpot, which can land the huge sums mentioned above, and smaller jackpots known as Major, Minor and Mini. The key to accessing the jackpots is to bring up the Bonus Wheel. This pops up at random, although the higher your stake, the more likely it is to appear.

The Mega Moolah Bonus Wheel is a straightforward ‘Wheel of Fortune’ type feature and when it appears all you have to do is watch it spin and click on the Stop option. The wheel will then slow and stop, and will either land on one of the jackpots or return you to the base game.

Some progressive jackpot slots games can be a little intimidating to new players, but Mega Moolah Slot’s easy to pick-up play and low maximum stake have made it an enduring popular title for South African players. Its combination of uplifting, colourful graphics, regular wins and the potential for huge jackpots have been enjoyed by millions of players around the world.