Playtech has launched a number of movie-related slots titles and the Matrix is one of its latest. It is based on the cult 1999 film starring Keanu Reeves, which spawned two sequels. So how does the Matrix measure up to the other movie-themed slots in the Playtech stable? 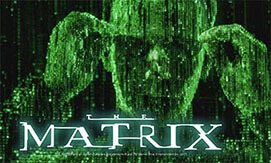 The Matrix slot is a classic, five real, fifty pay-line game, which is playable at stakes ranging from R9.5 to R9500. It was released earlier this year and as you would expect from a modern game it runs well on desktop, mobile and tablet devices. The RTP is reputed to be 95.14%.

As a visual spectacle, Playtech have excelled themselves. The game is played against a backdrop of digital code. It features extracts from the film itself, which help to build a futuristic, dynamic atmosphere. The symbols on the reels include relevant images such as code, telephones and sunglasses, along with three of the film’s most famous characters: Trinity, Morpheus and the evil Agent Smith.

Look out for Neo!

The game also features a code-style Neo and he is the key to some potentially big wins. The Neo symbol works as a wild, substituting for all other symbols aside from the Free Games scatter, and can reward players with up to ten multipliers if you line up three, four or five on the screen. The black cat wild symbol is another to look out for. It only appears on reel five but it substitutes for all symbols, and if it fills reel five completely, the Déjà vu Shuffle feature is triggered. With this feature the wild reel duplicates itself on the first reel and all of the other symbols on the reel shuffle to provide more winning combinations. 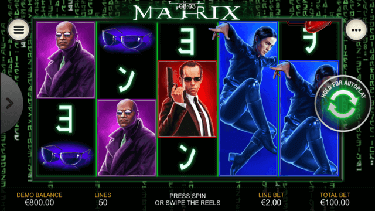 The main selling points in this game are undoubtedly the two free spins features, which you can access by lining up the Free Games scatter on reels 1, 3 and 5.

The other free spins mini-game is the Nebuchadnezzar Free Games feature. In this game, you have unlimited free spins as the sentinel wild symbol swarms the reels. If a sentinel wild lands, it locks in place for the remainder of the feature, although if you land an orb symbol, this will remove all of the sticky wilds. The free spins continue until you land six wild symbols on the reels at once, and it’s possible to bring up some big wins with this feature.

The Matrix has been one of the most popular and influential films of the last twenty years and with the Matrix slot, Playtech has done a good job of capturing the film’s spirit. The layout is excellent, and the animations are in keeping with the theme.

From a playing point of view, the Déjà vu Shuffle feature in the main game offers regular wins and is a welcome boost to the main play, while the free games features are good value, particularly the Nebuchadnezzar, with its high number of sticky wilds that can lead to some big payouts. It’s an attractive game, with plenty of variety that should keep slots fans entertained.