Aristocrat is one of the lesser known names on the iGaming roadmap. However, this is a little bit of a misconception by players. It’s one of those companies that many players will have enjoyed one of its titles, without necessarily knowing that they have played it. A good example of this would be Raid: Shadow Legends. This is a massively popular MMORPG that’s available on mobile devices. It is also a game that was created by Aristocrat. The company was formed in 1953 and since then has been part of a lot of revolutionary advancements. The company actually invented Video Poker machines! Since then it has mainly made a move into brick and mortar casinos rather than online casinos, but this is something that is changing as more and more Aristocrat games become available to online players. With a focus on mobile development also becoming apparent, it’s safe to say that Aristocrat could be a name that’s on the lips of many players over the next few years.

What Makes Aristocrat So Good?

2. Aimed at creating lots of enjoyment and interest

4. A focus on mobile development is apparent 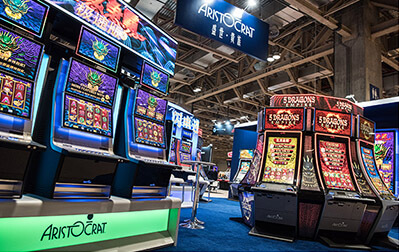 Quality of Software - Graphics and Sound

In terms of visuals this is something that Aristocrat does spend a lot of time on. The games that the company puts out tend to have some top level graphics. All of the visuals have a hint of realism to them, without going too far and becoming photorealistic. It means that players can enjoy the quality of the graphics without being too aware that they look like photos. There is also a lot of colour in Aristocrat titles, which helps to give them a fun feeling when players try them out. Players can also expect to see well designed backgrounds which help to make the games look good on every single level.

Animations are fast and smooth in Aristocrat games. A lot of the time the animations that play when a win is created really help to make the game stand out. When you see the screen filled with different in game characters it really adds to the excitement of a big win coming your way.

It means that Aristocrat games are not just very immersive but they are also lots of fun. If you enjoy games that are colourful, exciting and drawn to a very high standard, then the graphics on show in Aristocrat games will definitely catch your eye.

The sounds are also very well done in Aristocrat games. Part of this comes from having a background in brick and mortar casinos. With lots of noises taking place, it’s important that slot games stand out. Aristocrat has taken this attitude forwards with its video slot games for online players. It means that the sounds really do add an extra layer of atmosphere to the titles.

In general Aristocrat is one of the best developers in terms of aesthetics. It makes sure that every game it puts out has a lot of pizzazz going for it. It can grab the attention of even the most hard to please player and make sure that they are blown away by what’s on offer.

Aristocrat has actually been at the forefront of a lot of developments in the iGaming world over the years. As already mentioned it was the innovator of Video Poker machines, but it’s also become known for a lot of its video slot titles. Buffalo Stampede won a number of awards in the time since it was released, with some other licensed slots also getting a lot of praise within the industry. Although Aristocrat does create a lot of video slot titles, it’s also known for some of its high quality table games.

This means that it offers every kind of player something that they will enjoy. On top of this Aristocrat also has mobile developers under its umbrella, so players don’t have to worry about titles only being available on desktop.

Aristocrat also has a number of mobile games available for players to enjoy. These are often outside of the iGaming world, but there are also iGaming titles available. It means that players who enjoy playing on the go can easily try a large selection of high quality games on their mobile devices.

No it doesn’t. Aristocrat is generally focused on table games and video slots. This means that it has not made the move into the live dealer sphere. Although Aristocrat is widely regarded as a forward thinking and innovative company, it is also well aware that it shouldn’t spread itself too thin. With the areas that it already has covered, it makes sense to stay away from trying to do too much all at the same time.

Does Aristocrat offer a free trial version of its titles?

There are demo versions of Aristocrat games available to players. However, it’s important to double check whether the online casino that you are playing at offers access to these games. Some only allow players to play for real money, so if you do want to play in demo mode then you should find out if this is the case first.

Does Aristocrat have a regulatory license?

There are regulatory licenses in place for Aristocrat games. As quite a large iGaming developer, it is important that the company is fully regulated. This makes sure that players can rest easy knowing that they are fully covered by a range of different legislation when playing. It also adds to the total safety and security that is in place for Aristocrat.