Microgaming is one of the world’s most well-known online casino software providers, and can claim to be the first to launch an online casino. It also provided the platform for the first ever online casinos in South Africa. The company is renowned for the quality of its games and powers over 120 online casinos and over 40 online poker sites based all over the world.

Microgaming was launched in 1994. When it released its first genuinely online casino software. Two years later it went live with its first online casino site. The company was named as one of the founding members of the Interactive Gaming Council (IGC) in 1997. In 1999 it revealed its PlayCheck technology for the first time, followed shortly afterwards by its CashCheck software. Both significant innovations in the gaming industry.

The company was also one of the founding members of e-Commerce and Online Gaming Regulation and Assurance (eCOGRA). This is an important industry body involved in games standards testing and player protection. They were one of the first companies to join with a mobile technology partner. They'd offer mobile gaming and were pioneers of live dealer table games, launching their live dealer software in 2006.

Microgaming have scooped many awards during their period of operation. They have the distinction of providing the software for the first online casinos in South Africa.

The company is based in the Isle of Man, but does have links with the South African gaming industry. They work with Derivco, a South African casino software company. On some of their products, and their software powers many of South Africa’s most popular sites.

Microgaming has earned a reputation for innovation, having scored many firsts. Back in 1998, they created Cash Splash, the first ever wide-area progressive jackpot slot. They have become known for their headline-grabbing slots games, suchy as Mega Moolah, on which one player set a record for the biggest ever progressive jackpot. It was a payout of €6.37 million in 2009. The mobile version of the same game also created the world’s largest mobile jackpot winner when one gamer landed a £3.7 million prize.

Among its many software innovations has been the introduction of anonymous online poker tables. The concept of poker variants, and the company was also one of the pioneers of live dealer tables games. In 1999, it created the PlayCheck and CashCheck technology. It helps players to monitor their spending and gaming history. Furthermore it developed Viper, a system that enables online casino gamers to personalise their play. The Microgaming Poker Network (NPN) also features an achievement system. By allowing players to build their reputation as they play Microgaming poker games. 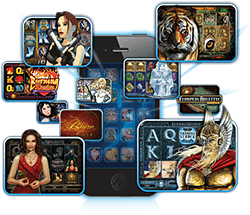 Microgaming’s stable of games is impressive and currently stands at 600 unique titles. With over 1000 game variants in their download casino. This while their instant Flash casino offers access to over 300 games.

Its roster of games include a wide range of cutting-edge slots titles. Such as Hitman, Tomb Raider, Hellboy, and The Dark Knight. There are over 400 slots games in all to be found in their download casino. It includes everything from the most modern video slots to old three-reel favourites. Every South African casino gamer will have enjoyed a Microgaming title at one time or another. Microgaming software also lies behind the world’s biggest progressive jackpot network. This system has paid out hundreds of millions to players over the years.

Microgaming are famous for their table games. In particular, their poker offerings, and they offer over fifty varieties of video poker. Some of these which make it possible to play a staggering 100 hand at the same time. Support for their software is available in 24 languages. Microgaming casinos accept deposits in a wide range of currencies.

Microgaming casinos offer their games in a both downloadable versions or through instant play via Flash. Their software is well known for its state-of-the-art graphics. Furthermor efor the cutting edge animations and sound, and the PlayCheck and CashCheck technologies. These are a feature of Microgaming titles are a great way for players to monitor their gaming history and to keep track of their bankroll.

As well as introducing many software innovations, Microgaming has retained its strong position in the online casino gaming world. They did this by ensuring that bonuses and promotions for new and existing players are competitive. The no deposit bonuses and welcome bonuses at Microgaming casinos are some of the most competitive you will find in the industry. They also provide for a range of innovative perks and rewards, including alternative payment method bonuses, refer-a-friend bonuses and high-rollers bonuses.

Microgaming’s long standing in the online casino games industry provides a high level of reassurance for South African gamers. Their reputation has been built on innovation and the quality of their games. As well as the eyecatching progressive jackpots made possible by Microgaming technology. Many South African casinos work with Microgaming and they remain one of the most reliable names in online casino gaming.