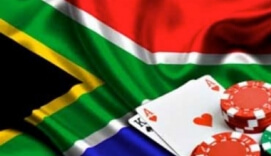 Different types of gambling are mostly legal in this country in 1994 and this was supported by the democratically-elected government then. But in 1996, a major change happened with the approval of limits on gaming through the Gambling Act. Until today, there are certain limits to gambling and online gambling is illegal especially when accessing an unlicensed platform from South Africa.

Now, the arrangement is about to significantly change after an economic manager from the Eastern Cape province publicly stated his support for full legalization of gambling. While speaking in the 15th Gaming Regulators Africa Forum, Mlungisi Mvoko who represents the Eastern Cape MEC suggests that potential of legalized gambling in helping boost the economy of South Africa. In his speech among participants, he cited the potential revenues that the government can collect from the full legalization of gambling. He said that this revenue can help not just for his province (Eastern Cape) but also for the rest of the country.

A Boost in Revenue is Possible

Mlungisi Mvoko was a guest at the 15th Gaming Regulators Africa Forum recently and he talked about the positive effects of the gambling industry to the Eastern Province. In his address, he noted the importance of new technologies tempered with regulation and shared that it can help boost gaming and grow the tax base of the province. The economic manager also compared online gambling to the cryptocurrency industry which grew tremendously in value in recent years. He shared that Bitcoin is an emerging technology that helped users and this can be expected as well with online gaming.

Gathering Designed to Discuss the Impact of Gaming

Mr. Mvoko of East Cape is just one of the many speakers and guests in the gathering. The conference was hosted to discuss the impact of gaming on the continent and representatives from other countries were invited as well. Other countries in attendance are Seychelles, Uganda, Ghana, Kenya, and Zimbabwe.

In the continuation of his speech, Mr. Mvoko talked about the importance of helping the economy recover from the economic crisis. He mentioned the effect of the crisis on the tourism and manufacturing industries which are critical to the growth of the province. The province relies heavily on these industries and he suggests that they should diversify their income sources. And the full legalization of online gambling is a great option. He believes that with proper support, it can help spur economic development.

Today, regulations on online gambling are strict in South Africa. The only time local players can play is when they participate in a platform licensed by the provincial gambling board. Mr. Mvoko hopes that the rules shall be relaxed on websites that will be licensed. However, this is a tough task in a country that is critical of gambling. If his proposal pushes through, then he can expect a lot of opposition in the quest to relax the gambling laws in South Africa.