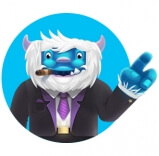 If you’re following the promotions and campaigns of Yeti Casino, then you know that it’s one of the biggest operators of casino campaigns for the South African market. Aside from the new customer bonus and cashback offer, Yeti Casino also runs a monthly slots tournament covering its premium games.

This month of April, it’s running another slots tournament until April 30th. But before you get lost in the excitement of the race, make sure to check out the results for the March race for some inspiration.

For the first slot race, the casino published the Top 9 players who managed to collect a prize. As part of the promotion, the slots race runs from March 1 to 31 and the top players can win free spins playable on Ocean’s Treasures and the Top 3 players in the leaderboard get a cash prize. The best player from Slot Race 1 is ‘Grant’ who earned R5,000 after completing 6,880 rounds. The next two players on the list are ‘The King’’ and ‘Timba35’ who managed to scoop €300 and €200 respectively. The other players on the list collected 100 free spins on Ocean’s Treasures.

For the second slot race of the month, the Top 9 players earned bonus cash. According to Yeti Casino, the best player of this batch is ‘Golo’ who collected €400 using 54,824 game rounds. He is followed by ‘Yet14’ and ‘Yet20’ who won €200 and €100 respectively. Compared to the first batch, no free spins were awarded to the winning players.

By publishing the results of the last promotion, Yeti Casino proves once again why it’s considered as a reputable casino for players from South Africa. This only means that the operator takes transparency seriously and wants to promote customer satisfaction. With the release and publication of the results, are you ready to take on the challenge of a new slot race?

Running until April 30th, the April Slots Race of Yeti Casino offers a prize pool of R50,000 for the lucky players. Again, the rules for the slot race are simple and easy to follow. You just need to play the qualifying slot titles and complete at least 250 game rounds. Some of the popular and premium slot titles you can play this month are Book of Dead, Book of Ra, Legacy of Dead, Rise of Merlin, and the Wild Rails. You can also check out some Netent premium slots like Fortune Rangers and Narcos.

Are you ready to see your name in the next month’s release of results? If yes, then now is the best time to visit Yeti Casino. The promotion is available for all registered customers of the site who completed at least one deposit.