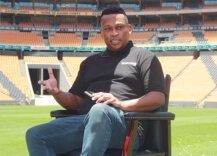 Robert Marawa is one of the most iconic broadcasters for sports in South Africa and he has teamed up with the leading sports betting operator Hollywoodbets. This will see him acting as an ambassador for the brand.

The announcement for this partnership was held in FNB Stadium, which is home to the Kaizer Chiefs as well as hosting games for both the South African national team for football and rugby union. The aim of this partnership will be an attempt to bridge the gap between fans of football and sportsbooks all around Africa and even further afield.

The details of this partnership

Marawa is the owner of MarawaTV. This is an offering that streams sports content all across the world. He will give insights into upcoming games, allowing bettors to get some expert knowledge on these fixtures before placing bets of their own on the outcome of the games.

Marawa will also be taking part in numerous initiatives, such as helping the development of grassroots football in South Africa, as well as helping those communities that are particularly suffering as a result of the COVID-19 pandemic.

The commercial manager of Hollywoodbets is Sandisiw Bhengu and he believes that Marawa will be able to add a huge amount of knowledge, experience, and opinion through his content. With both parties having a lot of passion for sport, the operator sees it as being a good fit as it strives to expand its presence across Africa.

As part of the announcement of this partnership, Marawa gave a cheque to Chippa United player Rodney Ramagalela worth R100,000. This was because the player’s house recently burnt to the ground in mysterious circumstances. The player is nearing the end of his career and the two parties wanted to present him with the check to help rebuild his home.

Many sports betting operators look to partner with leading sports stars, former players. And personalities within the space. This allows them to reach their target audience in a unique way. These ambassadors will often be a part of promotions, fan engagement events, and community activities.

Hollywoodbets is a South Africa-based operator that also has sportsbooks in many other regions, including the United Kingdom and Ireland. It has been around since 2000, has its headquarters in Durban, and employs more than 1,000 people. As well as offering sports betting it also has an online casino. It has engaged in many sponsorship opportunities across the world with different sports teams and athletes. This allows it to expand its reach and cover all major sports.