Top Slots to Hit the Online Casino Market in May 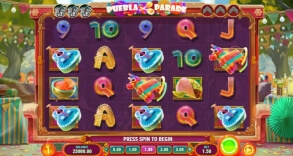 Every month, a whole new range of online slots hits the market. With so many different options, it can be really hard to keep track of what’s new as they come so thick and fast.

While a large number of titles might get released, not all of them are going to be worthwhile. Plenty of these new titles will be run-of-the-mill games. However, there will almost always be a handful of options that stand out of the crowd.

These are ones that are not worth missing. That’s why we’ve handpicked a few of the leading slots to be released through online casinos in May.

The Walking Dead is one of the most iconic shows from the past decade or so and it has already had one slot game based on it. Due to the massive popularity of the original game, Playtech has decided to go to the well once more and come out with a sequel.

A lot of the same characteristics are in place, as well as additional fixed bonus rounds. All of the real characters from the show are showcased as Playtech has secured the rights.

One of the cool features is the wild walker symbol. This sees an animated zombie popping up as part of the base game and filling up a complete reel. Some terrifying graphics then ensure, making you feel like you are in the apocalypse yourself.

Another cool feature is the Spin Reel option. This sees each winning spin activating a split reel. This leads to the reels shifting a position and engaging a respin of a reel. Other aspects include some mega multipliers, as well as bonus modifiers, and free spins.

Puebla Parade brings a great level of color to proceedings as we move into the summer months. The Mexican-themed title is one of the best in its genre. There’s a lively festival taking place, full of senoritas and senors.

They bring along them respins and sticky wilds. Plenty of enticing multipliers are to be found, as well as some top-tier graphics. This game will put you in the mood for sunny days ahead.