Las Vegas is one of the world’s most famous cities, with a bustling nightlife and a vibrant culture that extends beyond its world class casinos and luxury hotels.

There are so many attractions in this remarkable city that it is possible to spend weeks there without taking it all in. Obviously, there are the world famous casinos, but Vegas is also home to the world’s largest observation wheel; the High Roller, which offers incredible views across the city. You can dine in any one of hundreds of eateries, offering cuisine from around the world, and enjoy some of the best shopping areas available in any major city, including the Grande Canal Shoppes, decorated in the style of Venice.

And for a change of pace, you can enjoy the beautiful Bellagio Conservatory, the Palazzo Waterfall Atrium, and Madame Tussauds Waxworks at the Venetian. Daredevils can try out the exhilarating Sky Jump for the ultimate adrenalin rush, and there are a host of night spots to enjoy, from the eclectic charm of downtown Vegas to the Cirque du Soleil.

Of course, Las Vegas is primarily known for the quality and quantity of its casinos. There are gambling venues offering every type of game you could wish to wager on, from classic slots to rare table games. Any trip to Las Vegas is not complete without considering a visit to one or more of these classic gaming establishments: 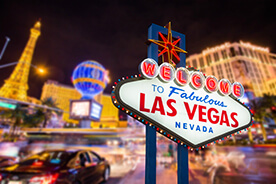 Caesars palace is one of the most well-known gambling names in Las Vegas and is the main venue of casino and leisure company Caesars Entertainment. It has a history going back to 1966, and has been regularly refurbished, but has retained a distinctive Roman theme and has become synonymous with the glamour and thrills of Vegas.

The Cosmopolitan Casino is one of the newer casinos in the city, opening in 2010. Owned by the Blackstone Group, it consists of two high towers stand at more than 600 feet, making it a distinctive local landmark. Known as a world class gaming venue entertaining international and local visitors, it offers a taste of luxury and is also famous for its stunning giant chandelier.

Another of the city’s casino stalwarts, the Luxor stands out even in this most exuberant of cities. Based on an Ancient Egyptian theme, it features a spectacular light beam shone into the Nevada sky from the top of its pyramid, as well as an enormous sphinx. One of the best known MGM properties, it is popular venue with lower stakes gamblers.

The Excalibur was opened in 1990 and has remained a popular tourist spot ever since. One of the cheaper casino complexes in the city, the Excalibur has over 4,000 rooms available and its central location, affordable accommodation and castle theme has helped to establish its reputation as a family-friendly venue.

The Venetian Las Vegas has been a feature of the city since it was opened in 1999 on the site of what was once Sands Las Vegas. A popular casino complex, based on an Italian theme, it offers top quality casino gaming and a taste of luxury.

Perhaps the most famous of all Las Vegas, casinos, thanks in part to the film Ocean’s 11, the Bellagio is known all over the world as a luxurious gambling destination. The Bellagio is the epitome of Vegas casino style, offering the full range of casino games, and is particularly popular with poker players.

Opened back in 1991, the MGM Grand has been through numerous incarnations, and is now a beautiful Art Deco complex based on the Golden Age of Hollywood. Owned by the well known MGM Resorts group, it is one of the stalwarts of Vegas.

Wynn Las Vegas has established a reputation as one of the biggest resort complexes in the city. Built by the man responsible for the Bellagio and the Mirage, the Wynn offers visitors and gamblers a luxury environment, complete with opulent décor and immaculate gardens.

These are some of the best known casinos in Las Vegas, but the city is full of gambling opportunities and there are dozens more great venues for fans of slots and table games. If you’re a dedicated South African casino gamer or an online player who wants a taste of the ultimate gaming city, then Las Vegas should be top of your travel list.